Jumping crocodiles on the Adelaide River near Darwin.

40 minutes from Darwin, in the Northern Territories of Australia everyone has the opportunity to go on a specialised Jumping Crocodile cruise. Crocodiles naturally leap out of the water for food and these wild crocodiles on the Adelaide River sure do a great show for tourists.

The biggest crocodile in these rivers is 6.5 metres and they named him Agro. He’s a massive beast that has over 20 girlfriends and dominates a good portion of the river. Whenever another male croc comes into his territory – especially during breeding season – there is sure to be a croc fight. Sometimes to the death.

Here’s Agro on the bank after having a feed of a RAW PORK CHOP – to entice him onto the bank for tourist photos. They feed them raw pork bones and all it’s part of their natural diet as there are many feral (wild) bush pigs in the area. They also eat fish, wallabies, cows, dogs… and YES, they have eaten human. Anything that moves in their area they’ll eat. 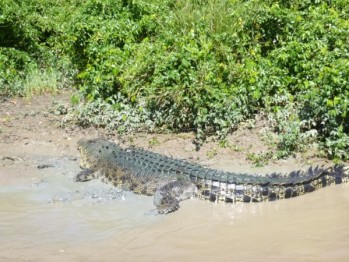 A tourist was told a story about a croc that was caught and when cut open they found horse shoes in it’s belly – the tourist asked, “Why would a croc eat horse shoes?”

Female crocodiles grow up to 3 metres and male crocs grow bigger – the biggest one recorded in Australia was a 8.63 metre croc shot in Norman River near Normanton. So, when crocs are bigger than 3 metres you can tell it’s a male. The dominant males can have 10 to 20 girlfriends and live around 100 years. Females lay up to 60 eggs in a big nest on the banks of the river – usually in long grass about 20 metres from the water. When the babies hatch they chirp letting the mother know and then she helps to unbury them and carries some to the water. After that her job is done.

Crocodiles eats anything that moves – right – so any babies or small crocs in Mom’s way she’ll eat. Dad eats them too. Birds eat young ones – and fish eat the young ones. Very few crocs of every nest actually grow to a full mature adult.

Scary – the name they gave this Croc because of his straight forward nature.

On the cruise they told us that there are 7,000 crocodiles in the Adelaide River – maybe they included the babies because that’s a lot of crocs.

So, here we were floating along the river and, of course, after years of feeding them the crocs know the boats and before long we spot one coming towards us. Scary is the most straight forward and he’s not afraid to eye ball (look at) everyone on the boat before even considering if he wants a pork chop.

I think this fellow was 5.5 metres if not more than that because he might be the next dominant croc soon – after he challenges Agro the 6.5 croc. It seems Scary has an agenda as he seems to be eating chops from each cruise throughout the day – so perhaps he’s hoping to gain some more bulk before the next breeding season (in the wet season which is December-March). 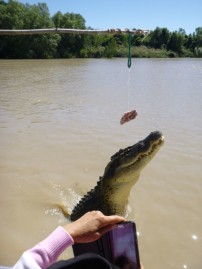 Dangling a Pork Chop over a croc makes them Jump

Dangling a pork chop over a crocdiles head makes them push mighty hard with their tail to launch their heavy bodies out of the water for an easy feed. It’s sounds like an easy thing to do – and I was lucky enough to be trained for a day so I know it’s complexities.

At first you dip the pork chop into the water making a splashing noise – and you do this a few times to draw the croc closer to the boat. Now, keep in mind that if you were to dip your fingers or toes into the water you’d get the same affect – so everyone on the boat is told they MUST keep their body parts inside the boat.

Each crocodile has a different style of feeding – some jump readily whilst others are more lazy and sneak up on you. Scary loved to hover beside the boat for a few pictures – with his head out of the water so we knew where he was – and then he’d smile for the camera (so it seemed! – they were even thinking about re-naming him Hollywood!) and then he’d do a big jump out of the water for us. A great Jumping Croc!

That’s a big Croc! His name is Scary.

Other crocodiles had a more sinister way of getting their pork chop and when you were dipping and splashing that pork chop they would – 5-10 metres away – disappear under the water. We didn’t know where the were! They vanished.

And that’s when tourists started pointing – out over the water – at birds or other crocs in the distance. Their arms and fingers stretching over the water, or cameras taking pictures. AND THEN, whammo! The croc would suddenly jump out from under the pork chop and give everyone in the boat a fright! Any croc could be hiding under that murky water and you wouldn’t be able to see them. Keep your body parts inside the boat people! 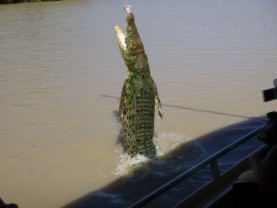 Crocs are unpredictable. Each one has a different personality. The main advice when it comes to crocs is don’t swim, dip or go near croc infested waters. In 2015 a croc ate a local man near the bridge of this Adelaide River.

He was fishing as per his usual routine – and everyone had warned him time and time again that he was too close to the water – and he wave at them and would say it’s all good mate.

Yet, one day he stepped into the murky water ankle deep to wash his hands and he stepped on the head of a 6.5 metre albino croc they used to call Michael Jackson (true story!). Michael Jackson ate him. 3 hours later they shot the croc to identify the body and make sure there was no  foul play.

Here’s a female on the muddy bank. You can see the difference in size compared to a male croc.

Locals don’t swim in the water up North here in Australia. There’s no beach swimming, river swimming or lake swimming. You just never know if a croc moved in over night.

Interesting fact: Crocodiles used to grow up to 30 metres. Years ago humans shot all the really big crocs.

I love crocs. They fascinate me and I absolutely loved spending a day with them in this wild environment.

Power of Mudras | Healing and Meditation

This Land Has a Voice