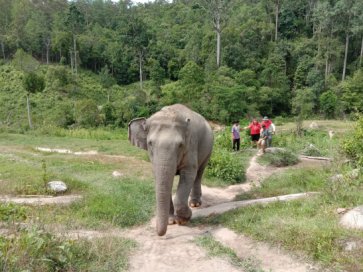 In an ideal world all elephants should be free to do as they please and not be subjected to working a 9 to 5 job to entertain humans. (Watch MY VIDEO BELOW!!)

In an ideal world humans should be free to do as they please and not be subjected to working to pay bills, feed their family and make other humans richer.

The world is a weird place and all of us in this large earth family are being suppressed and oppressed. It’s the world of limitations.

Since planning my trip to Thailand I desired to walk with Elephants, but how does one choose an ethical place? No riding is the first thing to consider.

At my accommodation I asked the host, a local man, what elephant experience he recommended. I was delightfully surprised to hear that he had gone on a couple of tours, so knew personally which one was good.

He recommended “Into the Wild Elephant Camp” because it is a small business with only five elephants and didn’t have tonnes of people. He said some of the big foundations seemed to feel more like a business with 70 elephants and over 200 people per day. It’s always great to get a local’s perspective, eh.

I loooved my experience with Into the Wild because it was a very personalized experience. We could get up close to the elephants with ease.

They were honest about being a business that was evolving and trying to keep a balance between caring for the elephants, paying for elephant expenses, keeping jobs for locals who needed to support their family and safely entertaining guests.

There’s alot of talk about how elephants are cared for in Thailand. The manager/owner Pai at the elephant camp gave us a very informative talk telling us how times are changing for elephants in Thailand.

Elephants were used by the people as effective workers. People were poor and elephants are handy. Elephants have been abused, that’s true.

But Pai says times are changing and there are rules the government sets, and certain things are not allowed any more. In fact, all elephants must have regular doctor check ups.

In this camp there are only five elephants and they have acres to seemingly roam free on, albeit their working hours. There were only 20 people in our group, and the other group had only 10. So much smaller groups than other places!

Pai, the manager/owner, used to be a vet with tigers and lions for many years before so he seems to know the best way to care for wild animals. He explained to us how elephants can be dangerous because they, if they wanted to, can kill a human easily.

At times they need to be strict with an elephant to make sure humans are safe. For instance, while on the tour an elephant was going to pick up a large fallen tree next to where people were standing. One of the carers told her quite sternly to stop doing that. She listened. Perhaps a bit disgruntled though, as she really wanted to move that tree. Lol.

Pai’s talk gave our minds some perspective before we went for a walk in the rainforest with these massive beings.

It was obvious the rapport these guys have with the elephants. They talk to them in language, sit next to them in the bush, and wash mud off their backs…. But NO riding was done.

This fellow in particular seemed to be free flowing and soft hearted towards the elephants. I think he would have been very happy without tourists there to bother the elephants. (Me too!). I loved watching his interaction with this baby. He wasn’t going to let her in his bag and set his ground rules firmly, but gently. Like a good parent. (I just noticed that in the picture it might look like he is using a stick towards the baby, but it’s not that way at all. SEE MY VIDEO BELOW! He is simply resting his hand on hanging bamboo. NOT using it!)

You’ll see in my upcoming video how these elephant carers and elephants are at ease with each other.

Pai did mention how these elephants have acres of land to roam free on, but it looked more like they had a strict schedule to please the tourists. For instance, we all walked together and bathed together at particular times. 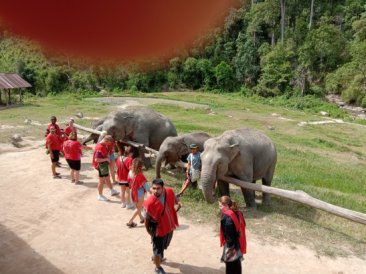 I think the elephants would prefer not to work and instead roam free. But I also think human children would

prefer to roam free and not go to school. And I’m sure, you the reader, feel the same about your job.

At least these elephants are seemingly cared for and have a much easier job than logging.They have been with human carers for a long time and therefore have become somewhat reliant, so says Pai. Just like a home pet – you wouldn’t expect it to live in the wild easily.

The adventure began when were picked up at 6.30am from our accommodation and road for an hour and a half in the back of a truck.

When we arrived at the elephant camp Pai gave his informative talk.

Then we fed the elephants sugar cane as they stood behind a wooden log. I think this was more for our training. Lol.

Next we were free to walk with the elephants. We didn’t walk for long. Maybe 20 minutes. Then we just stood there in the bush watching and interacting as we suited our individual needs. Some were braver than others and got up close, under the watchful eye of a carer. I would have like to walk for longer. But maybe some of the tourists were not so physically fit.

This part was my favorite of the entire morning.

The next part I think was more to entertain the humans. Many people wouldn’t get much joy from standing in the bush for too long. So, the tour is arranged to keep the humans happy and we bathed with the elephants. Keep in mind the elephants pee in this water. Uh.

Then we all cleaned up and the humans ate lunch – as elephants were grazing on bananas, sugar cane, etc the whole time!

1. They never mentioned where the animals stay at night. I suppose they’d have to be kept some how. My daughter used to have pet rats and kept them in a cage. In their natural habitat rats are used to roaming free in a large area. Horses are often kept in barns, inside corals or tied to a tree. I’d prefer to see all horses world running free as they pleased. Yeah, like I said at the beginning of this blog … It’s a restrictive world for many of us on this earth.

2. The elephant carers were always leading the group, talking to the elephants and keeping a watchful eye. Each carer had a different personality as much as you would find in your own family group. Most of them were gentle and flowing with both humans and elephants. One was a bit bossy and insisted the elephants do what the tour was doing. He was the one making sure great photos were taken too. Lol.

Santosha loves personal development and expanding consciousness so much that it consumes her every thought. In fact, she's now travelling the world and has meditated in Thailand and India. :) Read more about Santosha here: https://healingtheplanetfromwithin.com/about/

Getting Rid of My Stuff

About Kundalini Yoga and My Practice