After many months of planning and preparing I still found myself hesitating to leave what was familiar. As I watched the familiar highway signs pass by it felt good, but when the signs changed to something I’ve never seen before my stomach knotted up. Was I really that stuck in the familiar?

Driving is boring! The roads in Queensland, Australia are long. My first stop was 3 ½ hours away and while that seems to be a rather acceptable amount of time… there is nearly nothing in between!

My first stop was planned to a tee. I was to stay in Gin Gin at a free place on someone’s land they called Archer’s Idle. I expected to see archery as per the picture, but what I found was an open piece of land with a very rugged outdoor compost toilet. There are a few stagnant water holes on the property, and some bush figs (which I think are edible).

Tam and the kids were friendly and came down past the dam to say “G’day” while I was cooking up carrots and potatoes on the little methylated spirit stove.

THAT STOVE is a miracle! Thanks to Broc and Stacey I easily whip up a quick meal without much hassle. Just a bit of methylated spirits and a match… and about 10 minutes later my meal is cooked. It’s absolutely brilliant! 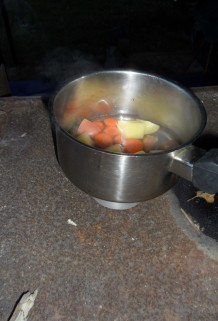 As evening set I found it odd that I didn’t hear cicadas… perhaps it’s not their time of year? … I just assumed they were out all year round.

At sunrise I was off and keen to find a breakfast location. But alas! Miles and miles later…. Nothing worth eating so grabbed some heatlhy snacks from the van and nibbled my way North-er.

Expanding Reality and Discovering the Unknown

Making Soap in the Australian Bush