Earth is Our Body | Ancestors of the Land

I stood there – jaw dropped down – in awe of where I stood. In front of me towered the dark brown reddish Kimberley mountains in shapes I’ve never seen before.

“Acknowledge the ancestors of the land. Call out to them in greeting.” The wise words of Aunty Milly rang true in my head.

I’ve become familiar with speaking out loud in the bush now. I call out softly or loudly depending on the location of tourists. Scanning with my mind’s eye I felt no one present or near and starting to talk to myself – to the ancestors – to the beings I cannot see. Certainly I can feel their presence – their eyes looking at me from those mountains.

Looking up I announce my name, where I’m from and that I’m just travelling through this land to look at it’s beauty. I acknowledge and respect the ancestors and guardians of the land. I don’t know the local language but expect they can see my energy patterns – see right through me they can. They look.

Job done I think to myself. I continue walking along the path.

That gut feeling. It comes back to me. Last time I felt this – soon after – I had a stabbing in my solar plexus and was sick – until I saw a Traditional Healer.

This time I feel it. I felt it in my body. I acknowledged it with my mind. I listened this time. And so I STOPPED. I stopped walking and waited to hear who is warning me.

I saw eyes in the mountains now. Big ones. I hadn’t seen them before. They had bushy old man eye brows. Very wise. On the other side of the trail I saw more large eyes – beings from long ago. They look at me. Or at least it felt like it. And still another pair of eyes. Different beings here. Different eyes.

Grandfather and I chatted for a few minutes or an hour – the time plays tricks with you in the bush. He wanted me to meet someone.

I walked further down the trail – not far – and saw another set of eyes. His son. It felt like that. It was his son.

Nibbling on the boab seeds while I listened to the birds – feeling the energies. There are no words – no language.

Wandering back to Grandfather I heard a calling in my mind. A taunting almost. Its taunting words invited me to touch the rock. It wanted me to travel through the long dry grass to the edge of the mountain to touch it. Great power here it said.

Then an energetic image came to mind. No pictures. A strong feeling projected into my mind that if I touched that rock I would be touching myself.

You’ve lived many of thousands of years on this planet.

Yes, I’ve had many lifetimes. That’s something I feel deeply.

You lived and died here once. This rock is your old body.

Um. Ok. Now I’m going crazy. So, what you’re telling me is that – well, yes – when our body dies it returns to dust – to earth. And therefore, the ground we walk on could be our own body from a past lifetime?

Well, I have had the idea that YES we are walking on old dinosaur bodies – breathing the same air the dinosaurs took into their lungs.

We’re walking on the land that past civilisations lived on. Civilisations and times the scientists have not even documented because they’re past the time that it can be recognised.

So the Earth is our body. Both now and in the future. 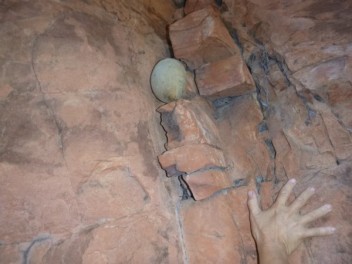 Ok ok ok…. I get what you’re trying to say. The voice taunts me further to touch my old body. To walk through the long dry grass and feel it.

I shake my head. Taunts and tricks. Not my style.

With a crease in my brown I walked back to Grandfather in kind of a dazed trance state. He’s the Elder here. If I was going to put my hand on these mountains it will be him.

My mind foggy now as the expansiveness of the knowledge settles.

I place the boab seed on a ledge on Grandfather, and gently rest my hand there in thanks.

Would you ask Spirit or the Elders of the land?

Are You a Healer?